Drill, drill and drill some more is the mindset of the 40 cadets on the 2018 to 2019 Patriot Drill team.  The first wave of hard work was rewarded with three trophies at the Ocean Spring ‘Greyhound’ battalion Drill Meet, 6 October in Ocean Springs, Mississippi.  There was twelve schools from across the state represented.  These schools were representative of all service across the Department of Defense.

Forest Hill ‘Patriots’ was one of two Jackson Public School programs that participated in the highly competitive drill event.

With Cadet/ Major Tonai Webster as the commander for the all-female regulation squad a first place trophy was garnished. The Battalion commander, Cadet/ Colonel Brittany Bradley pulled out a third place trophy with a platoon of mostly first year cadets.  The final trophy was in the armed squad category, commander by Cadet/ Major Travis Adams.  The team also competed in color guard, armed platoon, unarmed platoon and two exhibition categories.

These cadets are well on their way to cadet Command Army Junior Reserve Officer Training Corp national drill Meet in Fort Lee, Virginia this upcoming spring.  To keep them sharp; they will compete in the Mississippi All Service Drill Meet on 20 October, the Army State Drill Meet 15 December and several local drill meet between January and March of 2019.

Keep up the hard work as you displace your motto of #learningtolead and on your way to becoming a better citizens. 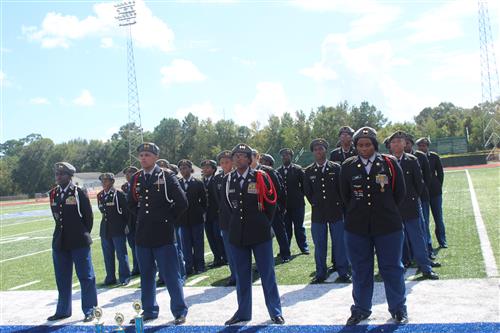